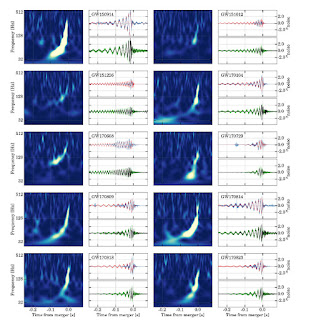 LIGO and Virgo are pleased to announce that the strain data from the O2 observing run have been released. These data are now available through the Gravitational Wave Open Science Center (https://gw-openscience.org).

The O2 observing run began on November 30, 2016 and ended on August 25, 2017. The release includes over 150 days of data from each of the two LIGO observatories, as well as 20 days of data from Virgo, making this the largest data set of "advanced" gravitational wave detectors to date. Observations in O2 include seven binary black hole mergers, as well as the first binary neutron star merger observed in gravitational waves, all recently published with the GWTC-1 catalog. The LIGO Scientific Collaboration and Virgo Collaboration have published a number of papers based on these data; please see the LIGO Scientific Collaboration web pages for a list of these papers, and several more will be appearing soon. Along with the strain data, the release contains detailed documentation and links to open source software tools.

Image: Time-frequency maps and reconstructed signal waveforms for the ten BBH events. (Image adopted from arxiv.org/abs/1811.12907 by the LIGO Scientific Collaboration and the Virgo Collaboration)