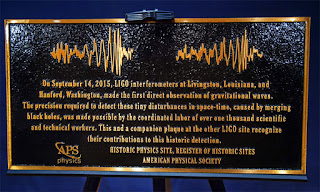 The American Physical Society (APS) has designated the LIGO observatories in Hanford, Washington and Livingston, Louisiana as the 2018 APS Historic Sites. At a ceremony on June 20, 2018 at LIGO Livingston Observatory (LLO), APS presented memorial plaques to the Lab.

COLLEGE PARK, MD, June 13, 2018 -- Two laboratories that comprise the Laser Interferometer Gravitational-wave Observatory (LIGO) will be designated Historic Physics Sites by the American Physical Society (APS) in a ceremony beginning at 11:00 AM on June 20, 2018 at the LIGO facility in Livingston, Louisiana. Plaques to be placed at the both the Livingston and the Hanford, Washington laboratories recognize the extraordinary efforts that ultimately led to the first confirmed detection of gravitational waves emanating from the violent and distant astronomical events, such as black hole mergers.

The citation on the plaques reads:

"On September 14, 2015, LIGO interferometers at Livingston, Louisiana, and Hanford, Washington, made the first direct observation of gravitational waves. The precision required to detect these tiny disturbances in space-time, caused by merging black holes, was made possible by the coordinated labor of over one thousand scientific and technical workers. This and a companion plaque at the other LIGO site recognize their contributions to this historic detection."

Rainer Weiss of MIT will be on hand for the ceremony, where APS President Roger Falcone will present the APS Historic Site plaque to be installed at the LIGO Livingston laboratory. Weiss shared the 2017 Nobel Prize in Physics with Barry Barish and Kip Thorne (both of Caltech) for developing LIGO and for the detection of gravitational waves in late 2015.

"I am delighted that the American Physical Society has designated the LIGO sites at Livingston, Louisiana and Hanford, Washington as historic places for the first direct measurements of gravitational waves from astrophysical sources," said Weiss. "It is a tribute to the many scientists, engineers, students and administrators that made LIGO successful. It is also an acknowledgement of the courage and wisdom of the National Science Foundation to take a risk on new and transformative science."

The APS established its Historic Sites initiative to raise public awareness of physics. The plaques placed at sites identify important and interesting events in the history of physics as a way to engage the general public to increase awareness of important, past scientific advances.

"It was a great surprise to me that the APS recognized the LIGO Observatories as historical sites so soon after the first detections of gravitational waves," said LIGO Executive Director David Reitze. "This speaks to the tremendous impact that gravitational waves have already had on physics and astronomy. Everyone in the LIGO Laboratory is delighted to receive this wonderful recognition."

Although the sites recognized through the program previously have typically involved scientific events from decades past, the APS bestowed the distinction on LIGO less than three years after its groundbreaking detection of merging black holes. Though recent, the detections were the culmination of extensive research and development leading up to the current LIGO facilities.

"It's important to acknowledge the many years and extraordinary effort that have gone into LIGO," said APS President Roger Falcone, who will present the plaque on behalf of the APS. "Rai Weiss and Kip Thorne have been working toward gravitational wave interferometers since the mid-sixties, and Barry Barish's leadership beginning in the early nineties has been crucial to ensuring this daunting program came together and was successful. The APS Historic Site designation recognizes the dedication of thousands of people and their decades of struggle that have opened a new window on the universe, as much as it memorializes the first detection of gravitational waves a little over two years ago."

The two LIGO laboratories each feature highly sensitive, L-shaped laser interferometers. Lasers that travel the length of the interferometers measure the distance between mirrors placed 4 kilometers apart. The interferometers detect changes in the distances between the mirrors to a precision of one part in a billion-trillion, or roughly a thousandth the diameter of a proton. The separation between the mirrors fluctuates as the space between them is compressed or stretched with the passing of gravitational waves. Because gravity is an extraordinarily weak force, enormously violent events such as the collisions of black holes are required to produce waves sufficiently intense to register in the LIGO interferometers. Although one laboratory would be enough to detect gravitational waves, together the pair of LIGO facilities ensure that signals detected in one are confirmed in the other. In addition, because the laboratories are far from each other, one in Louisiana and one in Washington state, the differences in the signals and their detection times help narrow down the location of the events that produce the waves.

The American Physical Society is a nonprofit membership organization working to advance and diffuse the knowledge of physics through its outstanding research journals, scientific meetings, and education, outreach, advocacy, and international activities. APS represents over 55,000 members, including physicists in academia, national laboratories, and industry in the United States and throughout the world. Society offices are located in College Park, MD (Headquarters), Ridge, NY, and Washington, D.C.