LIGO's 1st Detection to Be Honored on a German Postage Stamp 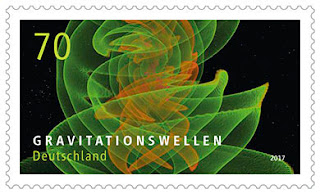 The stamp will be released into circulation on December 7.

Germany's Federal Ministry of Finances announced a release of a postal stamp commemorating the 1st detection of gravitational waves, per this announcement by the Max Planck Institute of Gravitational Physics. On September 14, 2015, LIGO observed for the 1st time gravitational waves from the collision of two black holes -- an observation that paved the way to several more groundbreaking discoveries, including the detection of gravitational waves from colliding neutron stars, which LIGO and Virgo announced on October 16. The Deutsche Post stamp features numerical relativity simulations performed at the Max Planck Institute for Gravitational Physics. The Institute is one of the two research centers involved in the design and operation of the GEO600 detector, a ground-based gravitational-wave detector located near Hannover, Germany. Like LIGO and Virgo, GEO600 is a part of a worldwide network of gravitational-wave detectors. It is also a member of the LIGO Scientific Collaboration (LSC).