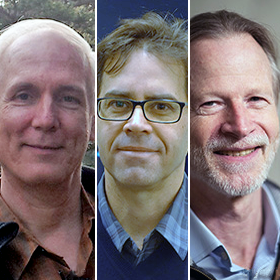 Advanced LIGO leaders Dennis Coyne (Caltech), Peter Fritschel (MIT), and David Shoemaker (MIT) are the recipients of the 2018 Lancelot M. Berkeley Prize, the American Astronomical Society has announced. Said AAS Vice-President James Lowenthal: "We deliberately chose recipients representing both the scientific and engineering sides of the Advanced LIGO team. When it comes to LIGO, both the science and the technology are blockbusters!" Dennis Coyne is the Chief Engineer, and Peter Fritschel is the Chief Scientist of the LIGO Laboratory. David Shoemaker served as the Advanced LIGO Project Leader; he currently serves as the Spokesperson of the LIGO Scientific Collaboration (LSC).

Awarded annually since 2011, the Lancelot M. Berkeley - New York Community Trust Prize for Meritorious Work in Astronomy includes a monetary award, as well as an invitation to give the opening plenary presentation at the AAS winter meeting. Peter Fritschel will represent the awardees at the January 2018 AAS Winter Meeting and give the Berkeley prize lecture.