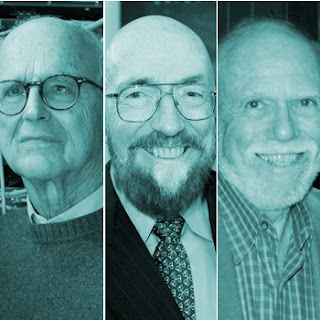 The Princess of Asturias 2017 Award for Technical & Scientific Research has been awarded to Rainer Weiss (LIGO MIT), Kip S. Thorne (LIGO Caltech) and Barry C. Barish (LIGO Caltech) and LIGO Scientific Collaboration "for the detection of gravitational waves," the Foundation has announced. "This achievement provides answers to one of the most important challenges of physics in its entire history," the citation notes. "The Award recognizes the individual talent and collective work of more than a thousand researchers belonging to a hundred institutions in eighteen different countries. The LIGO project supposes a technological challenge of prime importance. The extraordinary precision achieved by its instruments has allowed the observation of the merger of very massive black holes that occurred more than a thousand million years ago. The detection of gravitational waves opens up a new window for the study of the Universe that will allow the discovery of new phenomena and the study of regions of space-time that have as yet been non-accessible using current techniques." Full text of the Award citation. 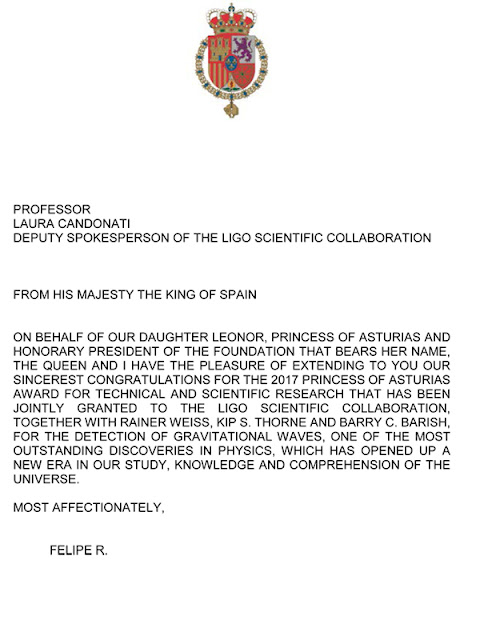 King Felipe of Spain, in a letter of congratulations to the LIGO team, called the detection of gravitational waves by LIGO "one of the most outstanding discoveries in physics."

From the Foundation's website: "The Princess of Asturias Foundation is non-profit private institution whose essential aims are to contribute to extolling and promoting those scientific, cultural and humanistic values that form part of the universal heritage of humanity and consolidate the existing links between the Principality of Asturias and the title traditionally held by the heirs to the Crown of Spain." The Foundation is named after HRH Leonor de Borbón y Ortiz of Spain, Princess of Asturias, who is the Honorary President of the Foundation. The Foundation awards annual prizes "to individuals, entities or organizations from around the world who make notable achievements in the sciences, humanities, and public affairs."

LIGO Lab extends its heartfelt congratulations to Rai, Kip, and Barry, and to all of our LSC colleagues.