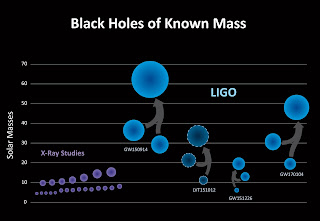 On June 1, 2017, LIGO announced a 3rd detection of gravitational waves. As in the first two detections, the event that produced the gravitational-wave burst was a merger of two black holes.

The two black holes, with masses of 32 and 19 masses of the Sun, collided and merged into a single black hole of 49 Solar masses. (The difference in the final mass is the result of dissipation of energy as gravitational waves.) The collision happened about 3 billion light years away. This is farther than LIGO's first or 2nd detection, which happened 1.3 and 1.4 billion light years away, respectively.

Read more about LIGO's most recent discovery at the LIGO Lab website.

Image: LIGO has discovered a new population of black holes with masses that are larger than what had been seen before with X-ray studies alone (purple). The three confirmed detections by LIGO (GW150914, GW151226, GW170104), and one lower-confidence detection (LVT151012), point to a population of stellar-mass binary black holes that, once merged, are larger than 20 solar masses—larger than what was known before. Image credit: LIGO/Caltech/MIT/Sonoma State (Aurore Simonnet)
Labels: Detection GW Astrronomy Observational run