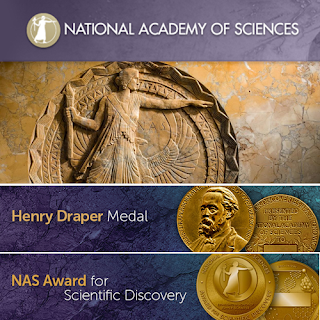 The Henry Draper Medal and the NAS Award for Scientific Discovery

Several leading LIGO scientists are among this year's recipients of two prestigious awards by the U.S. National Academy of Sciences (NAS).

Prof. Barry Barish, the former LIGO Laboratory Director and Linde Professor Emeritus of Physics at Caltech, and Dr. Stanley Whitcomb, the LIGO Chief Scientist (ret.), are the recipients of the 2017 Henry Draper Medal. The Henry Draper Medal is awarded every four years and is accompanied by a $25,000 prize. Quoting the NAS website, "The Medal honors a recent, original investigation in astronomical physics, of importance and benefit to science to merit such recognition." The Medal recognizes the leadership of Prof. Barish and Dr. Whitcomb, as they assembled a team of scientists and engineers who planned, built, and operated the LIGO facilities.

LIGO Laboratory Director, Dr. David H. Reitze is one of the three recipients of the NAS Award for Scientific Discovery. Dr. Reitze also served as a Spokesperson of the LIGO Scientific Collaboration (LSC); he was succeeded in this role by the current LSC Spokesperson, Prof. Gabriela Gonzalez of LSU. In addition to Dr. Reitze and Prof. Gonzalez, the award is shared by Prof. Peter Saulson of Syracuse Univ., who was the first elected Spokesperson of the LSC. The combined leadership of Dr. Reitze, Prof. Gonzalez, and Prof. Saulson, which spans 19 years and has led to LIGO's ultimate success, is recognized by this award. Today, the LIGO Scientific Collaboration consists of more than a 1000 individuals in about 80 institutions in more than a dozen countries, whose coordinated efforts made it possible to achieve the long-standing goal of discovery of gravitational waves and the opening of a new field of astronomy. The NAS Award for Scientific Discovery is awarded every 2 years "to recognize an accomplishment or discovery in basic research, achieved within the previous five years, that is expected to have a significant impact on one or more of the following fields: astronomy, biochemistry, biophysics, chemistry, materials science, or physics through the selection of recipients of the Award." The NAS Council determines the field in which it presents the award on a rotating basis.

Congratulations to Dr. Reitze, Prof. Barish, and Dr. Whitcomb, and to our LSC colleagues Prof. Gonzalez and Prof. Saulson on these well-deserved recognitions!