LIGO Discovery a Scientific Breakthrough of 2016 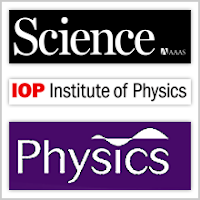 Science, IOP, APS Physics choose LIGO discovery among the most important events of 2016. Several influential scientific publications have selected the LIGO discovery as one of the most important scientific events of 2016. Science Magazine editors and writers have selected the story of LIGO detection as one of the Breakthroughs of the Year (stay tuned for the final People's Choice winner!). Physics World, the member magazine of the Institute of Physics, has chosen the LIGO detection as the Physics World 2016 Breakthrough of the Year. And Physics, a daily online-only news and commentary about a selection of papers from the APS journal collection, has put the LIGO discovery at the top of the editors' list of favorite physics stories of 2016. Also, in a well-deserved honor, Nature has selected the LSC Spokesperson Gabriela Gonzalez as #1 of Nature's 10 -- Top Ten People That Mattered in 2016. Congratulations to Prof Gonzalez from all of us at LIGO Lab!