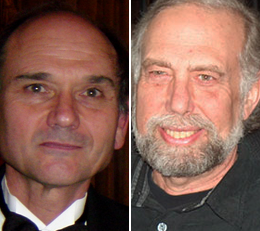 Albert Lazzarini and Jay N. Marx are in the class of the 2016 AAAS Fellows.
This past October, the American Association for the Advancement of Science (AAAS) announced its 2016 selection of the Fellows of the Association. Among the 391 Fellows are Albert Lazzarini, LIGO Deputy Director, and Jay N. Marx, former LIGO Executive Director (2006-2011). As stated on the AAAS website, the AAAS Fellows are honored "in recognition of their contributions to innovation, education, and scientific leadership. The tradition of electing AAAS Fellows began in 1874 to recognize members for their scientifically or socially distinguished efforts to advance science or its applications."

Congratulations to Albert and Jay on this well-deserved honor!