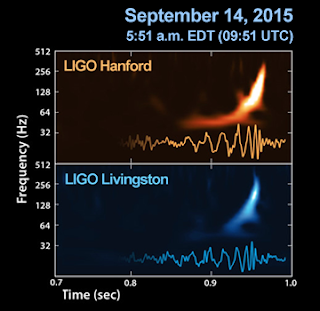 One year ago, a new era of gravitational-wave astronomy had begun.
One year ago today, a new era of astronomical observation began. On Sep 14, 2015, LIGO made its first direct observation of gravitational waves. It's hard to overstate the importance of this discovery. LIGO demonstrated the existence of cosmic objects that have never been directly observed before. The September 2015 event observed by LIGO was produced by binary stellar-mass black hole systems, whose existence was predicted by Einstein's theory of general relativity but never directly proven until now. The masses of the 2 black holes were higher than predicted by earlier observations. It was also the first direct observation of a binary black-hole merger. Notably, it was followed by another observation of a binary black-hole merger by LIGO, in December 2015. Gravitational-wave observations have a potential to become another tool in the arsenal of methods of study of the Universe. Traditionally these methods relied on observations of signals of the electromagnetic spectrum (gamma rays, x-rays, microwaves, radio waves, visible light, etc) and of particle-like entities (neutrinos, cosmic rays, etc). There are limitations to these methods, which gravitational-wave astronomy promises to overcome. Objects that do not emit radiation -- or for which the radiation does not reach us -- are invisible to us using traditional astronomical instruments. But may be possible to observe objects such as compact stars and other exotic objects, which do not have an electromagnetic footprint, via their gravitational interactions. Electromagnetic signals can be obscured, absorbed or otherwise modified by their environment. By contrast, interaction of gravitational waves with matter is negligible. LIGO instruments can see (or rather "hear") signals that no other instrument can. Used together with their electromagnetic counterparts in what's known as multi-messenger astronomy, LIGO observations will become an invaluable tool in advancing our understanding of the Universe.

This post on the LIGO Lab website describes in detail events in the time span between the LIGO's discovery and its announcement on Feb 11, 2016.