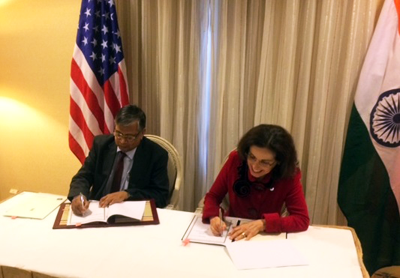 The US and India have signed a Memorandum of Understanding for establishing an advanced gravitational-wave detector in India. France A. Córdova, Director of the National Science Foundation, and representatives of India's Department of Atomic Energy and Department of Science and Technology, signed the MoU in the presence of India's Prime Minister Narendra Modi.

From the NSF website: "Today, National Science Foundation (NSF) Director France A. Córdova signed a Memorandum of Understanding (MOU) to lead the way for establishing an advanced gravitational-wave detector in India. The MOU was also signed by representatives from India's Department of Atomic Energy and India's Department of Science and Technology."

The signing of the MOU is an important step in building a gravitational-wave detector in India and another step toward a global network of GW detectors. Once the LIGO-India detector becomes fully operational, it will allow the scientists to better triangulate the sources of gravitational waves, and to determine their location with greater accuracy. A more precise localization is especially important for studying electromagnetic (EM) counterparts that accompany gravitational wave-producing events, such as gamma-ray bursts, as it will make it possible to quickly and accurately locate and observe them. This will be an important role the GW observations will play in the upcoming era of multi-messenger astronomy. The redundancy of having multiple detectors each at a unique location is another advantage. It will minimize the effect of the inevitable downtime of the detectors, for maintenance or due to local environmental disturbances. A global network of multiple detectors will increase the likelihood that several of them will be actively observing at any given time.

India's Ministry of External Affairs tweeted about the MOU signing: