Reaching Still Higher by Going Down Under: the LIGO-Australia Concept 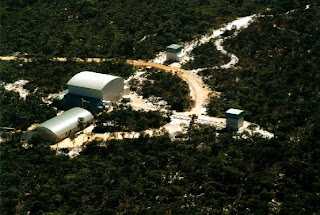 LIGO scientists have recently unveiled an ambitious plan to enlarge the scope and power of the laboratory's detectors. Currently the three LIGO interferometers are all situated within the contiguous United States - two in Hanford, Washington, and one in Livingston, Louisiana. Separated by nearly 2000 miles, the distance between them helps to pinpoint the sky position of those events the interferometers detect, and to act as a mutual cross-check to rule out inauthentic signals. If the Louisiana detector suddenly sounds the alert that a gravitational-wave signal has been received, while the Hanford detectors remain calm and quiet, odds are it is a false positive at the southern site, perhaps the faint vibrations of a tree felled by loggers in the nearby forests.

But what if one of our three detectors were located much farther from the other two, LIGO scientists speculated? What if it were located on a different continent? Already the LIGO interferometers operate in sync with the three-kilometer Virgo detector, placed in Cascina, Italy, and the 600-meter GEO detector near Hannover, Germany. How much greater would the scientific yields be if another detector were installed even more remotely on the globe, somewhere in the Southern Hemisphere, for instance - somewhere in Australia, to be precise.

Everyone sees the benefits. For gravitational-wave astronomy to be most effective, a global array of detectors widely separated by continental distances is essential. It would ensure optimum source localization on the sky and enable multi-messenger astronomy using gravitational-wave signals. An expanded array that includes LIGO-Australia would provide much improved sky localization and detection confidence, stronger duty cycle and flexibility, with greater ability to extract the full astrophysical information inherent in the waves. Far distant from the present LIGO, Virgo and GEO Observatories, Australia is ideally located to be this vital new outpost in the advanced detector array.

The idea is daunting; no one knows this more than those most committed to its success. Over the summer discussions have been vigorous between the LIGO Laboratory and the Australian Consortium for Gravitational Astronomy (ACIGA). The agreed-upon plan calls for LIGO to direct the components of a complete advanced interferometer to Australia. Our colleagues down under would be required to provide all the infrastructure necessary to house and operate the machine, including furnishing a suitable site, roads, buildings, facilities, the vacuum apparatus, and all the personnel needed to install and commission the detector.

But technical challenges are not the obstacle. Cost is. To seize this opportunity, Australia would have to fund all requisite construction expenses, as well as commit to providing operations costs for a minimum 10-year term. Current projections indicate about $125M needed to build the infrastructure, and another $45M to run and maintain the facility for a decade. So as an estimated $170M endeavor, this is not an inexpensive proposition. But for the hundreds of LIGO scientists worldwide who see LIGO-Australia as the inevitable next step in building a necessary global array, the expected profits for astrophysics are worth every penny.

Pictured at right above, the Australian International Gravitational Observatory (AIGO) research facility, operated by ACIGA near Gingin in Western Australia, is the proposed site of the LIGO-Australia interferometer.

Will the plan go through? Insiders say that even 50-50 odds are optimistic. But an important go-ahead was gained last month when the National Science Foundation (NSF), LIGO's funding agency, greenlighted the plan and endorsed the scientific rationale driving it. Many obstacles remain. The NSF's approval is contingent on the understanding that relocating one of the next-generation interferometers to Australia will not add to the LIGO budget. Thus, much depends now on the ability of gravitational-wave scientists to convince Australian politicians of the benefits of this new observatory, and of politicians to convince Australian taxpayers of the benefits to science and humankind.