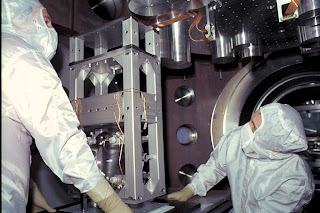 From its beginnings, LIGO was envisioned not as a one-shot experiment, but as an ongoing scientific quest with ever expanding reach. To that end, the two LIGO Observatories in Hanford, Washington and Livingston, Louisiana, are now undergoing equipment upgrades and system improvements to prepare for LIGO's sixth science run, scheduled this summer. This program of instrument upgrades - collectively known as Enhanced LIGO - will allow the detectors to operate at unprecedented sensitivities beyond even those of initial LIGO.

Both of LIGO's four-kilometer interferometers will be boosted by new optics, increased laser power, advanced seismic isolation tables, and improved signal sensing. Once complete, this new configuration will achieve a two-fold increase in strain sensitivity and a corresponding factor of 8 increase in the probed volume of the universe.

In addition to enlarging the present scope of gravitational-wave searches, Enhanced LIGO and the sixth science run (S6) will provide an important testing ground for the next generation of improvements, called Advanced LIGO. The technologies in use for the predicted 18-month run of S6 will demonstrate Advanced LIGO systems which, when fully implemented in 2014, will boost the detectors' sensitivities by a factor of 10 and probe a volume of space a thousand times greater than initial LIGO.